Far North Coast Conference was another success. There were 283 delegates on Saturday. The Master Classes with Ann Pelo and Jen Piercy were attanded by 73 people. Jen’s powerpoint for the conference is attached ECA-Conference-March-2016-Developmental-Delay- or can be found on the ECA NSW website.

On Friday evening ,the ECA Far North Coast region hosted a reception for Minister Leslie Williams. This proved to be a relaxed event with ECA members having the opportunity to discuss Early Childhood issues with the Minister. Minister Williams addressed the conference the following morning.

Ann Pelo was well received as the keynote. Ann’s tour is almost completed having a very successful function in Wagga on Saturday. Her last function for ECA NSW will be in Young on Saturday 16th . RSVP 12th April. Ann Pelo – Flyer v1 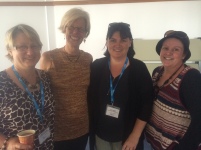